Spotify is most popular streaming music service in the world. As of February, 2019, Spotify has got 96 millions of paid subscribers. With about 110 million Spotify Free users, Spotify has a total number of 207 million active users. You may also want to try Spotify Free or join Spotify premium, for this, you need to know Spotify supported devices and Spotify system requirements first. In this article, we will list the details and also introduce Spotify Music Converter, which can download Spotify songs, albums and playlists as MP3 or M4A playable on any devices without limitation.

As an early bird of streaming music service with free plans, Spotify users are growing steadily. As of February, 2019, Spotify has got 96 million paid subscribers. Plus about 110 million Spotify Free users, Spotify has a total number of 207 million users.

Spotify supports a wide range of devices and is now available in 59 countries or regions. In fact, Spotify can be also installed and used in other countries which is not officially supported by Spotify. You may also want to enjoy free music with Spotify Free or join Spotify Premium, before that, check whether your device is supported by Spotify or not. Below is the brief information of Spotify supported devices and Spotify system requirements.

Using Spotify Connect is an easy job. Just make sure your devices are in the same Wifi network and your Spotify is up-to-date. On Windows or Mac, open Spotify and play something, then click "Connect to a device" in the bottom right and select the device you would like to play on. On iOS and Android, open Spotify and play something, tap "Devices Available" at the bottom of the screen and tap the device you want to play to. 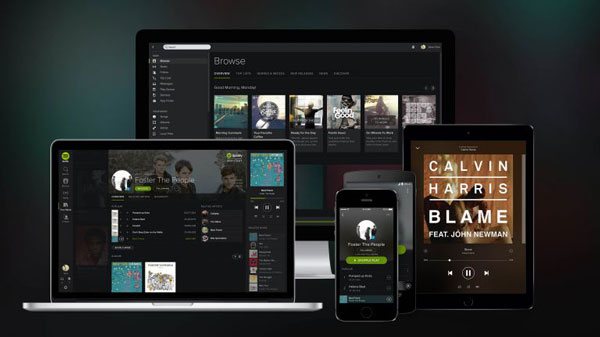 Check Spotify Support Status of All Kinds of Devices

In this section, we will list all popular devices and tell us what generations of the devices can be used to enjoy Spotify.

Spotify can be installed on any Windows PC using Windows 7, 8, 8.1 or Windows 10, both 32-bit and 64-bit are supported. There are Microsoft Store version of Spotify and normal Spotify on all kinds of download websites.

Spotify can be installed on any Mac computer running Mac OS X 10.9 (Mavericks) or later including latest macOS 10.15 (Catalina). You can get Spotify for Mac from Mac App Store or download websites like Macupdate.

Please note that the initial iOS version on iPhone 5, iPhone 5C, iPhone 5S, iPhone 6, iPhone 6 Plus, iPhone 6S, iPhone 6S Plus and iPhone SE are iOS 9 or older version, you need to upgrade to iOS 10 or later first.

The latest iOS version for iPod Touch 5 is iOS 9.3.5. As of August 2018, iPod Touch 7 hasn't been announced or released. So iPod Touch 6 is the only iPod model you can use to enjoy Spotify. iPod Touch 6 comes with iOS 8.4 and you need to upgrade to iOS 10 or later.

Spotify is not available on any generations of Apple TV including the latest Apple TV 4K.

There are many brands of Android mobile phones and tablets like Samsung, LG, Google Pixel, Huawei, Xiaomi, Oppo, Vivo, ZTE, etc. As long as your Android device is equipped with Android OS 4.1 or above, you can enjoy Spotify on it.

For Android TVs, Spotify requires Android TV version 5.0 and above, just download Spotify from the Google Play store for Android TV Apps. Then you can use Spotify Connect and stream the music from mobile or tablet to Android TV.

On some smart Samsung TVs in Tizen operating system (version 2.3 and above) produced from 2015 onwards, Spotify can be found in Samsung's App Store.

You can install Spotify app from the Microsoft App Store on Xbox One. However, Spotify is not available on Xbox 360.

You can install Spotify app from Amazon App Store and enjoy Spotify music on Amazon Kindle Fire. Spotify is also available on Amazon Fire TV with Fire OS 5.0.5 or newer.

There are many brands of MP3 players like Sony Walkman, Archos, Sandisk, Creative Zen, iRiver, Cowon, etc. Spotify app can't be installed on MP3 players and most MP3 players can't be connected to a Wifi network. Some MP3 players support Ogg file format, however, Ogg files downloaded from Spotify Premium are encrypted and can't be recognized. So Spotify is not available on any MP3 players.

Spotify Music Converter supports both Windows and Mac, and is fully compatible with latest Windows 10 and macOS Catalina. Download the free trial version to have a try now.

Step 1: Launch Spotify Music Converter and Spotify will be automatically launched as well. Do not close Spotify or play songs manually.

Step 3: All the songs in the album or playlist will be listed and checked. You can uncheck the songs if you don't want to download.

Step 4: Choose output folder, output format and conversion speed in Options if necessary. By default, 320kbps MP3 will be used.

With the steps above, you can easily download your favorite Spotify songs, albums and playlists in bulk as MP3 or M4A, no matter you are using Spotify Free or Spotify Premium. Since MP3 and M4A can be played on all kinds of devices mentioned above, you can easily get rid of the limitations and enjoy your favorite Spotify songs on any devices without limitation.