iMovie is one of the most popular video editing applications on Mac, iPhone or iPad, while Spotify is the largest streaming music service in the world. It's not strange that many iMovie users on Mac may want to use Spotify songs in iMovie video project as background music. Spotify songs can't be added to iMovie directly, but you can convert Spotify songs to iMovie supported audio formats like MP3/M4A first to resolve the problem easily. And the ideal tool for adding Spotify Music to iMovie is TuneMobie Spotify Music Converter.

Failed to Add Spotify Music to iMovie on Mac

Music always takes an important part in movie creation and video sharing. Spotify is the most popular streaming music service, as of quarter 2 of 2022, there are more than 188 million paid users and over 433 million monthly active users across 183 markets according to Spotify company information. Because of the popularity of Spotify and iMovie on Mac, it's not strange that many users want to use Spotify songs in iMovie video project as background music.

If you open Spotify, lanuch iMovie to create a new project or open an existing project, then drag a song from Spotify to iMovie, nothing will happen. We know that MP3, M4A, WAV and AIFF formats can be added to iMovie as background music, however, neither Spotify Free nor Spotify Premium are using these audio formats. As a streaming music service, Spotify Free doesn't allow users to download songs while Spotify Premium allows users to downloaded protected songs encoded in Vorbis Ogg format. The downloaded songs from Spotify Premium are protected and can't be converted to iMovie supported formats by all kinds of audio converters. 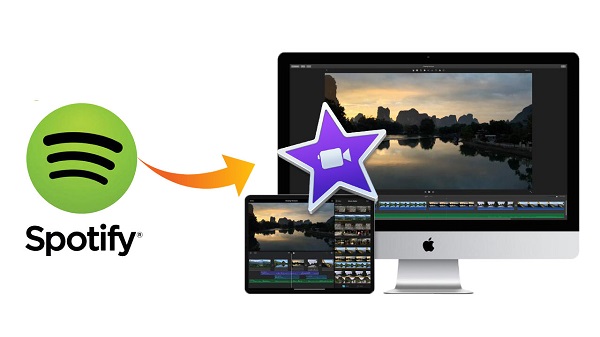 As to iMovie supported audio files, as long as you have added them to iTunes or Music library, you can easily add them to iMovie. Launch iMovie on Mac, create a new video project or open an existing project, then click "Audio" tab on the top toolbar, you will find "Music", "Sound Effects" and "GagareBand" in the left panel. You can easily add songs from Music section. In fact, Music here refers to Music app on macOS Catalina 10.15 or above, considering downloaded Apple Music songs from Apple, Inc., the same company of iMovie developer, can't be used in iMovie, you will soon realize that Spotify songs can't be added to iMovie as Spotify is the biggest competitor of Apple Music.

Failed to Add Spotify Music to iMovie on iPhone & iPad

On iPhone or iPad, Tap iMovie icon to launch it and open a project first, then you can tap the "+" button under the preview window after adding photos or videos, then tap "Audio" and you will see "Soundtracks", "My Music" and "Sound Effects". There are built-in files in "Soundtracks" and "Sound Effects" while "My Music" is your music library of Music app on iPhone/iPad. 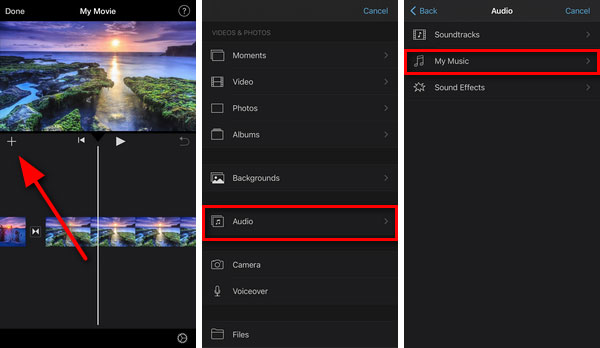 TuneMobie Spotify Music Converter helps you to convert your favorite Spotify songs, albums and playlists to MP3/M4A/WAV with ID3 tags retained. After conversion, you can add the output songs to iTunes or Music app, then you can add them from song list to iMovie project. If you are using iMovie on iPhone/iPad, you need to transfer the songs to your device first. Let's check why TuneMobie Spotify Music Converter is an ideal solution to add Spotify music to iMovie on both Mac and iPhone/iPad. 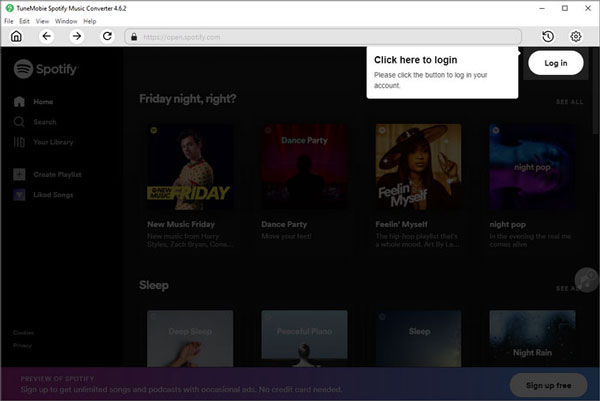 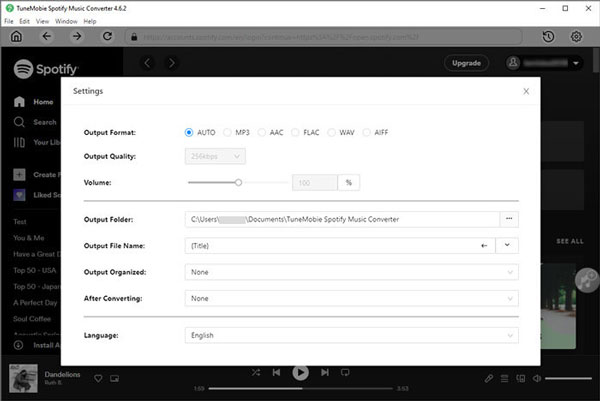 Now go back to built-in Spotify web player and browse your favorite albums and playlist. Open the detailed page of an album or a playlist you want to convert. 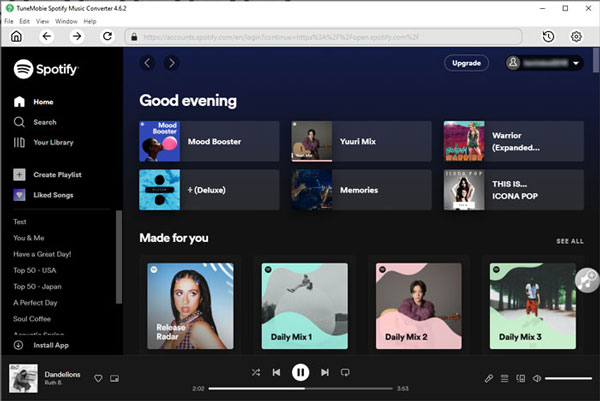 In the detailed page of an album or a playlist, you will see a button in the middle right. Move your mouse to the button and it will be changed to "Add to List". Click this button to add the album or the playlist to conversion playlist. 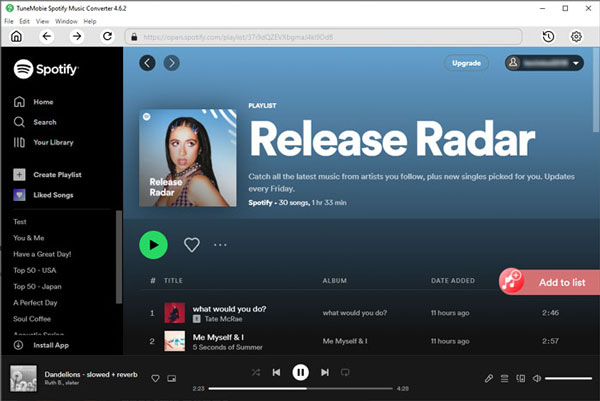 The converter will show you all the songs in a list with checked status. If necessary, you can uncheck any songs you don't want to convert. 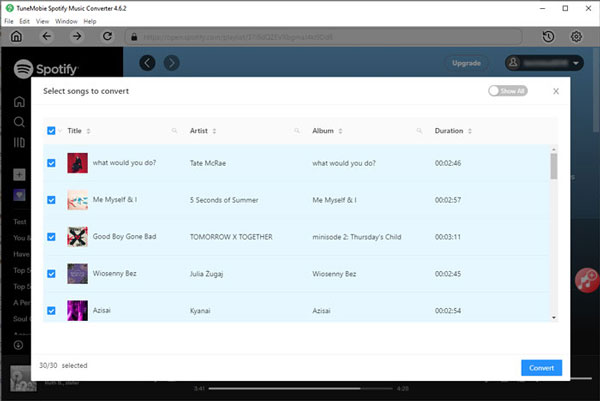 Now simply click the Convert button and selected Spotify songs will be converted to selected audio format for iMovie. 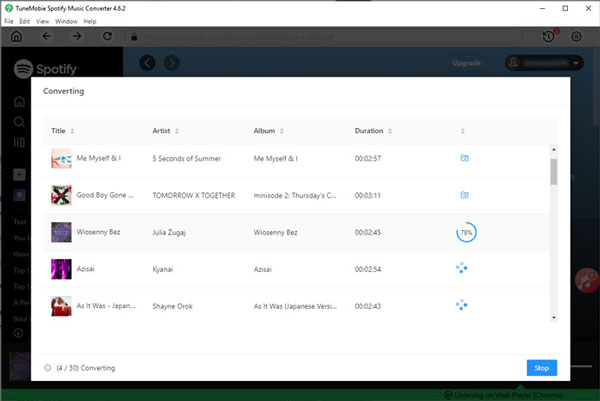 Now, launch Music app and click menu "File" > "Import", browse the output folder of Spotify Music Converter and add the songs. Or you can import the folder to add all the songs in it. If you are still using iTunes on macOS Mojave 10.14.6 or lower OS, you need to use iTunes instead and the menu will be "File" > "Add Files to Library".

Get back to iMovie, open an existing video project, click "Audio" tab and go to "Music" section, now the well-converted Spotify songs can be easily found in the song list. Simply drag-and-drop your favorite Spotify songs to music timeline as background music. After that, set Titles, Backgrounds and Transitions for your movie in respective tab. When everything is ready, you can click the up arrow button in the upper right to export your video project as MP4 video. 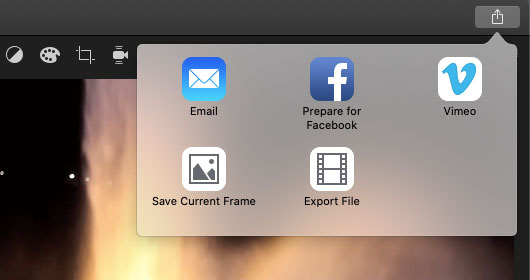 If you are using both Spotify and iMovie on iPhone or iPad, downloaded songs from Spotify Premium won't be displayed in iMovie either. What you need to do is to convert Spotify songs to MP3, M4A or WAV on Mac with Spotify Music Converter, add the output songs to Music app and transfer them to your iPhone or iPad. After that, you will be able to add well-converted Spotify songs to iMovie video project as background music.

Spotify songs can't be added to iMovie directly, but TuneMobie Spotify Music Converter can easily resolve the problem in only a few clicks. By converting Spotify songs to MP3 or M4A, you can not only use Spotify songs as background music in your iMovie video project, but also use them in other video editing software or DVD authoring software like Windows Movie Maker, Filmora, Sony Vegas, Adobe Premiere, etc. If you are using Spotify songs and iMovie on Mac, TuneMobie Spotify Music Converter may be the helper to get suitable background music in your video masterpiece.