How to Move Apple Music Songs to SD Card

The earlier versions of Apple Music for Android didn't allow users to change download location. If you download lots of Apple Music tracks for offline listening, the tracks may eat up a lot of device storage. Many Apple Music subscribers on Android appealed Apple to add SD card support. On early February 2016, Apple released a version of Apple Music for Android and allowed Android users to change download location. It's definitely a good news. Moving Apple Music to SD card can free up a lot of internal storage, enable you to download as many tracks as you want as longs as your SD card is not full, help to reduce using data connection when you don't have a Wifi connection. Here we will show you how to move Apple Music to SD card on Android.

Step 1: Open your Android device, tap on Apple Music to launch it, tap on menu icon in upper left and click on Settings.

Step 2: Click "Download Location" option in the Downloads section, click Yes in "Change download location to SD card?" popup dialog. You should also notice the tip that "The music currently stored on your device will be transferred to your SD card." 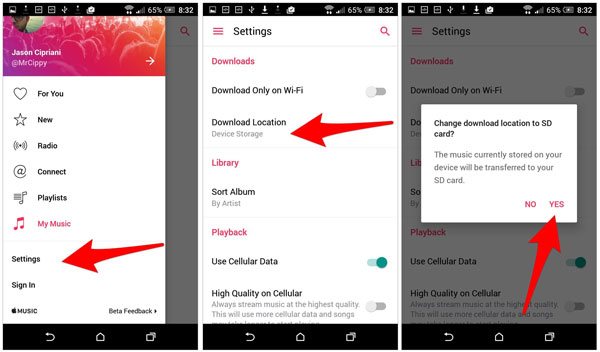 Step 3: Accept the prompt when asked if you want to move all of your currently downloaded music, along with any future music to your SD card.

In the same way, you can also move Apple Music from SD card back to internal storage whenever you change your mind. However, please note that if your device doesn't support SD card, you won't be able to see the option to change storage locations.

However, if you take out SD card and plug it in another phone, Apple Music tracks in the SD card won't be recognized and played because of Apple Music's multimedia encryption technology. 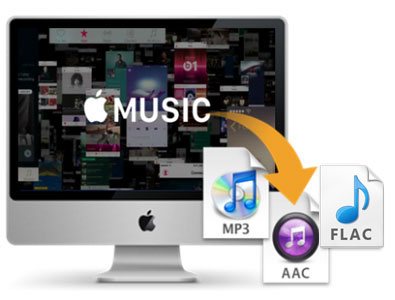 Follow the instructions below, and you can convert Apple Music songs to MP3 easily.

Launch TuneMobie Apple Music Converter and iTunes or Music app (on macOS 10.15 Catalina or later) will be launched as well. All your Apple Music tracks will be sorted in Music playlist or displayed as Apple Music Playlists in the left panel.

In the bottom panel, choose MP3 as output format in the output format drag-down list. Depending on your need, you can choose MP3 audio quality. If necessary, you can also click Options button to set filename for output MP3 songs.

Just click the "Convert" button on the toolbar to start conversion. All the selected songs will be converted to MP3 in a short time as the program performs 16X faster conversion speed.

With Apple Music Converter, moving Apple Music songs to SD card is only a piece of cake. If you also need to move iTunes movies or TV shows to SD card, you will also face the same multimedia encryption problem. For such a situation, you can use M4V Converter Plus to convert iTunes M4V videos to all-purpose MP4 first, it will be lossless conversion with all subtitles and audio tracks retained. If you need move both Apple Music songs and iTunes M4V videos to SD card, iTunes Converter Toolkit which includes both programs with discount will be the best choice.