How to Sync Apple Music Songs or Playlists to iPod Classic 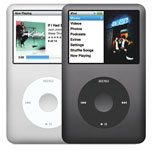 "Will apple music work on iPod classic starting June 30?" Apple user "Funkdaddie360" asked this question on Apple Communities, and there are 180 people who have the same question. 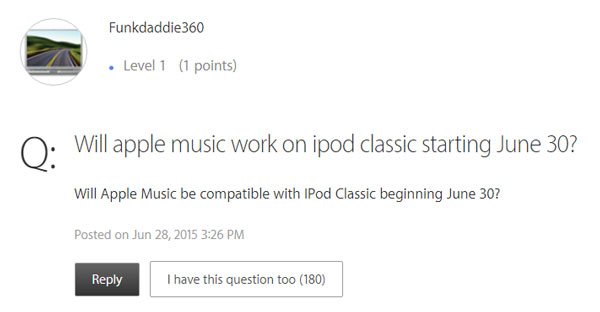 "So, I bought an iPod Classic so I could download songs from Apple Music and put them onto my iPod but iTunes WON'T LET ME!! I don't get it, I'm paying for a subscription but I can't use any of the music. Any help? I tried a bunch of document things like changing the file extensions and stuff, thinking it would trick iTunes into thinking it wasn't an Apple Music song, but it didn't work. There must be something written in the code of the song that tells iTunes that it is an Apple Music song. Please help :)" – Ssenn14 user also asked on Reddit's Apple Music board.

Don't upset! Here is a perfect solution to sync Apple Music songs or Apple Music playlist to iPod Classic. What you need to do is to convert Apple Music to MP3 or M4A format which can be synced to iPod Classic just like syncing your other music files. This way can be also applied for iPod Shuffle, iPod Nano and iPod Touch 4.

TuneMobie Apple Music Converter is such a software solution designed to convert Apple Music to MP3 or M4A for your iPod Classic.

After installation, launch TuneMobie Apple Music Converter. iTunes or Music app (on macOS 10.15 Catalina or later) will be opened automatically at the same time. If you are running iTunes, you may need to close it first. Please don't operate iTunes before the conversion is done.

Here we recommend you choose MP3 or M4A as output format, and set MP3 to 320kbps or set M4A to 256kbps to perform a lossless conversion because bitrate of Apple Music tracks is 256kbps.

Click the "Convert" button to start Apple Music to MP3/M4A conversion. Click "Open Output File" to get your output songs.

After conversion, you can now exit both Apple Music Converter and iTunes. Then launch iTunes and delete the converted Apple Music tracks to avoid duplication as you will add output songs to iTunes library and the songs look the same as original Apple Music tracks.

On September 9, 2014, Apple discontinued the iPod Classic. The sixth-generation 160GB iPod Classic was the last Apple product in the iPod line to use the original 30-pin iPod connector and the Click Wheel. According to Tim Cook speaking at WSJD Live, the iPod Classic was discontinued because the parts were unavailable and a redesign was unwarranted given the small amount of consumer interest in the product. However, three months after its discontinuation, the sixth-generation iPod Classic saw its price increase by up to four times its original retail price on eBay due to increased demand by music fans.